Woahhhhh. That was so much fun!

How on earth am I supposed to explain this? I’ve spent the last couple of minutes trying to work out what to say and where to start, so as per my other posts, I will start from the morning. I was up around 715am and having got into bed at 11pm last night I essentially had a bit of a lie in. Got things together for the day ahead, showered and left for breakfast. 9am we went for another track walk. No new information, just reiterating what we covered yesterday and again trying to build an image in our mind of what to expect. Back to the hotel soon after for a short video session where we watched some of the girls early runs to get a scope of what to expect on Day 1. A brief lesson on ‘how to put snow chains on’ followed and then it was lunch. Post-lunch we had some down time where we played some music, read some Blogger settings (still learning!) and caught up with social media exploits, aka, copying one of the girls group shots and trying to match said poses. See below.

I thought we nailed it, personally.

Two thirty post meridiem came around eventually. This whole morning felt like calm before the storm. A storm we had no idea of what to expect. Yes we have done the track walks and seen the videos and bla bla bla, but realistically what exactly can prepare you for such a ride without doing it? So we got shown how to load the sleds in the van and we hit the road. Upon arrival we unloaded everything and then checked the ‘rock’ in our sleds – this is how far out the runner underneath the sled protrudes and gives it a bow shape. This essentially affects the amount of runner exposed to the ice when we are lying on the sled (the knife). The knife is the same for us all at the moment, except we have different ‘rock’ sizes depending on how we lie on our sleds, most effected by height and weight (this blog is an education right?). Rock done and we head to the changing rooms to get our padding/tubigrip combo on then start to warm up, mobilise and visualise. Visualising at this point is an interesting one. Visualising something I have never done before. It is like playing combat flight simulator on your computer, then sitting in an old war plane at a museum, and then being asked to get in a fighter jet and to carry out air to air combat.

So anyway, we are all padded up and warming up doing whatever warm up you need to do to lie down. The first thing that struck me was a change in the room. A clear and sudden shift from our usual social camaraderie to a silent state of focus. I have seen this in athletics many times where people drift off in different directions or suddenly stop answering and drop into a deep concentration period, but I did not expect this to occur today or so quickly either. Nonetheless I got on with things, just like I would when preparing to race on track. Easy. About ten minutes pass and we get a briefing from Woody about what exactly we are doing, i.e. leaving the warm up area and getting our sled, passing it on, walking down the track and waiting our turn to lie on our sled and go – writing it now it sounds like we are being taught how to suck eggs, but in this new random environment with your mind elsewhere it is really helpful to have this straight forward guidance. 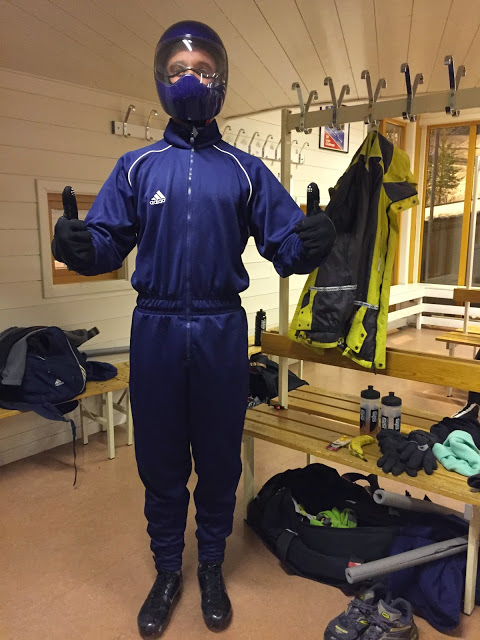 Will set up for his next run.

A few Italians set off on their Luge runs and thats it, Chris has left the building for his first descent (Chris is on sled 1 and we go through in sled order). This is it, the countdown begins. I am sitting and visualising, two or three times. Taking sips of water and trying to stay calm, in a way trying to avoid over thinking about what is coming and sticking to the things I have been told. It is a straight forward process in my mind. I like processes and step-by-steps. Tragic, I know. I am sled 7 and it is my turn to step out. I walk down and collect my sled then carefully walk down to the waiting point. A little reassuring fist bump on arrival from Wil reminds me we are in the same boat and about to experience something like no other. A few more visualisation opportunities and it is my turn. Sled set up by Woody and I am lying on my front thinking “this is it, and about time!”. I breath out and totally sink into the sled – complete relaxation. My grip is in place and I answer “yes” to being ready to go. Woody moves his foot securing me in place and I start moving. His favourite word the last few days for the start is “trundling” and to be fair, he was pretty accurate with his choice of word. Corner 4 you’re in the base of the corner, moving along the flat bit with a couple of nudges up the curve. This leads onto a straight and I start to pick up some pace, corner 5 is similar but following this is a small straight and boom, corner 6, the first big steer. Now, I know what’s coming, but my god does the sled roll and receive pressure fast and this really is a mad experience – I described to some friends that being on the big corners with pressure is like being on a roller coaster with someone standing on your back and learning their hands on your neck. Corner 6 was alright though, manageable. The labyrinth followed soon, 7, 8 and 9 come quick and I took a hit between 7 and 8. My first hit and it threw me a bit. What is funny is that between 8 and 9 you really pick up pace and after 9 comes 10, my next steer. What? Already? Corner ten goes okay but pace is rising. I come out of it fine and pass through 11 with no issues then boom, corner 12, and another big steer. These big corners are getting bigger and before you know it I am on corner 13. Crap. I’ve missed it. And f**k, my neck! Kept my head up (bad move) and my neck is taking a battering from the G force, plus I can’t see a bloody thing. I come out of 13 and take an expected hit into the left wall but where I am slow to respond I did not counter-act the hit, so I take another into the right hand side. I glide down relatively well after this though, thankfully, and smoothly pass through 14 which was all nice until 15 comes along. We have not been given a steer for 15, just told to relax and feel. My feelings mixed and I predominantly thought “I can’t lift my head” and so I was blind, I couldn’t see a damn thing, so I chilled out with my chin on the ice (haha). 15 and 16 passed and onto the straight “outrun” that goes up hill to slow you down. Some sloppy knocks on the way up and sideways skidding and you eventually come to a halt. That is it. Run one done. YES! I’M ALIVE AND WELL!

A rough idea of how close we are to the ice on our sleds.

Sled is taken out, a little post-run interview completed and time to get kit on. Head back to the start and wait for our next run. We did three runs today, which is what you usually do per session. I will not describe the last two runs in full detail, but to summarise I dealt with corner 13 much better and had a gorgeous straight line through to 14 (I even some some woo’s on the video review). Third run was better than the first, but not as good as the second and I have no idea why or what I did differently. I finished the session completely unscathed (advantages of having a slight frame) with a grin on my face and adrenaline pumping. But I must admit, I just feel like I want to do more. I want to learn more about the steers, and what to do if X happens, or Y happens. And I want to do this because not only would it make me a better Skeleton athlete, but because better lines means faster speeds, and I like speed!!! I have done a bungee jump, a sky dive and been on some of the best roller coaster in the world and this is up there, if not better than all of them. I think it is because I am in control (well…). With the others you are being taken for a ride, whereas this you have the capability of making things smoother and that is what is also exciting. Not just the speed or forces experienced, but the idea of nailing those corners and it bringing success when in a competition.

We all got back to the hotel and had a video review of our corner 13 exits into corner 14 which was interesting to see how others got on, not just the curiosity of how others did but also to learn from their mistakes or good points. Dinner came swiftly afterwards, sleds packed away and back to the cabins. We jumped in the ice bath for a recovery dip which was lovely – who doesn’t enjoy an ice bath that is outside, in -8°C, where you have to break a layer of ice to get in it? 30 seconds of that and I was in the shower in a flash. Spent the last few hours of the evening talking about the session, with heaps of laughter about the runs themselves and how we felt in different places (“it’s like seeeeven, eiiight, niine, TEN!”), plus some debate about moving forwards and the bigger picture. As always its interesting to get different perspectives and to share our thoughts out loud. I have a great bunch of lads around me which makes this really easy, and usually we can add comical value along the way which I personally think keeps us all at ease and sane.

Filling up the ice bath during the day

Thats it for today. I think I have given you plenty to read. I apologise if you switched off half-way through. Being on a sled on an ice track is indescribable to anyone that has not done it before – I tried my best to give a good analogy, and I hope you enjoyed. Or think I am mental. Either or! Pretty much the same routine again tomorrow, I am now more excited as I understand exactly what is coming!