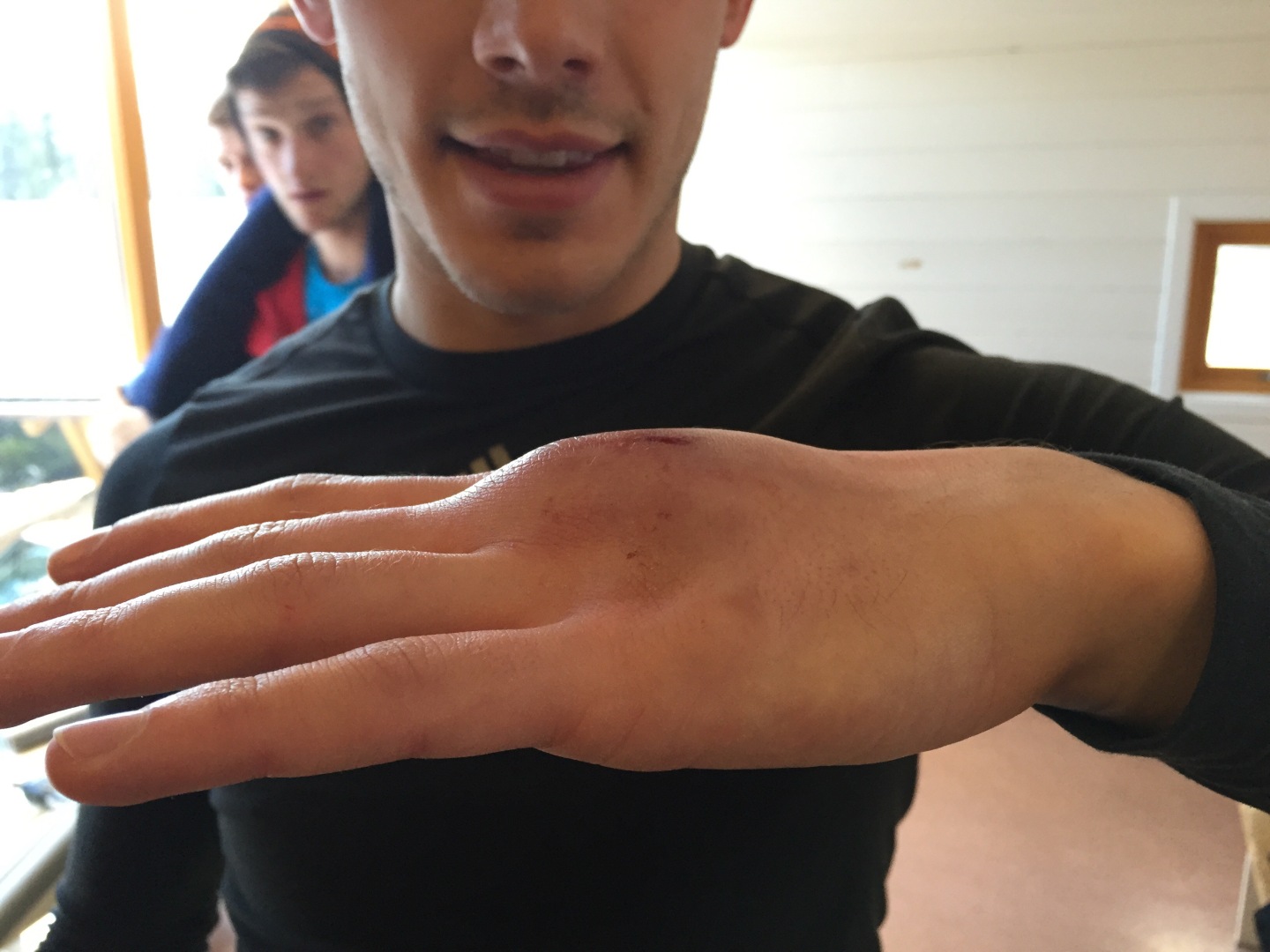 Real early start today in comparison to our first four days. It wasn’t too bad, I almost managed 8 hours sleep and once I was moving about I quickly got out of my tired state. We were at breakfast by 7am and putting the sleds in the van come 745, then off to the track in what seemed like a hot day. It has been between -8 and -11 the last few days, yet today it was only -1! I know this still sounds really cold, but ten degrees warmer made a huge difference not to have that bite in the air. Morning session today which meant no track walk prior to sliding which was slightly different to usual. I did not actually realise this on arrival so it threw my preparation a little bit as I suddenly lost track of what I was doing. I titled this blog ‘Plan B’ as there were a few things that happened today that highlights the unexpected changes that can occur, so the misunderstanding in my head was the first one. Quickly regained focus of what was happening and started to prepare for the session, however the track staff were preparing the track and our session was now delayed by half an hour. Not a huge delay, but you have to re-think your timings of when the session starts, how long for the Italian Luge athletes to finish and then roughly how long until it is your turn to head down – Plan B number two.

Upon video review yesterday we were told to add a knee press along with our shoulder press when steering in 6, 10, 12 and 13. This was great as most of us were making large oscillations in the corners rather than being smooth and parallel through them, so we now had a plan that would deal with this (at least during the first oscillation in the corner). More to add to our sequencing and visualisation, not to mention that the more we hit the flow of the corner, the smoother we are and the faster we go. This ultimately means that the pressures in the corner are greater and the corners will come at us faster too – lots to take in! I pushed off from the Luge start by myself and set off on a good line. Everything was fine on the top section as usual because the speed is not that quick, first tried my shoulder/knee steer combo on corner 6 and it seemed good. Straight through the labyrinth section with no knocks and I came out of 9 and smooth into 10. Another good steer in my mind. I was okay through 11 but close to the right hand wall that meant I shot up the corner of 12 a little more than gliding into it. The steer felt good, but the video review showed I need a better line. Thirteen was much better too and I came out of it hitting the left hand wall (again, and expected) but I came off and went straight down the run into 14 which was a relief – I hit both the left and right wall yesterday with a sideways skid into 14. The rest of the run was the usual blur because the pressures are so great, particularly in 15, as I cannot see much if anything whilst my head is being pushed right down and chin skidding on the ice. It is real joy.

I got quite a way up to the top of the outrun which was cool, it means I am holding form well and carrying speed – we haven’t been given individual finishing times or speeds though so I cannot quantify this to you unfortunately. After getting out of the run I checked myself over and found a little ice burn/graze on the back of my left hand, smaller than a 5p piece. It is fine. We get the van up to the top of the start house again and discover that Ash took a knock, also coming out of 13, and scrapped his hand. He has knocked it over the last couple of days too but this brush of his hand really inflamed it. The section we all keep hitting has dug a deep section into the ice wall and it needs to be shaved or filled – because this wasn’t done it meant that the sled moved into the wall and the arm/hand was exposed, so due to this it becomes a hazard for all. We cannot control where we come out of 13 and hit the wall, therefore it was decided it was not worth the risk of injuring more athletes. Session cancelled. 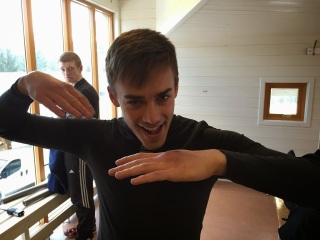 We were all gutted. Of course safety comes first, but collectively we felt our runs were the best we have done so far. Not being able to consolidate this was a shame, particularly as we have a day off tomorrow and our next session is Friday. Change of plan then. Plan B number three. We concluded with a track walk so we could see the lines in the ice we had created from our runs and to use the time to visualise what we had done and what we need to do. Back to the hotel for a video session then chilling out in the cabins. Most people checked their sleds  early on, whereas I wanted to use the time to come back and tidy up a few things plus relax and just do nothing. Our evenings go quickly here, so I wanted to exploit this.

Afternoon consisted of episodes of Friends and The Inbetweeners, blog writing, chatting and then I went to Dinner. After this I did my sled workshop to which I pulled the middle out, sorted the bolts and taped it back up (as we are due to complete 15 runs in three days) to then discover I forgot to check the four frame bolts. Error. Round two of that tomorrow then! Group session in Midtgarden 4 for chatting and tv time, plus another episode of ‘Cards Against Humanity’.

Getting my screw on!

Day off tomorrow with a little trip to Lillehammer. Lets see what excitement that brings 🙂